All except 1 lunch and 2 dinners 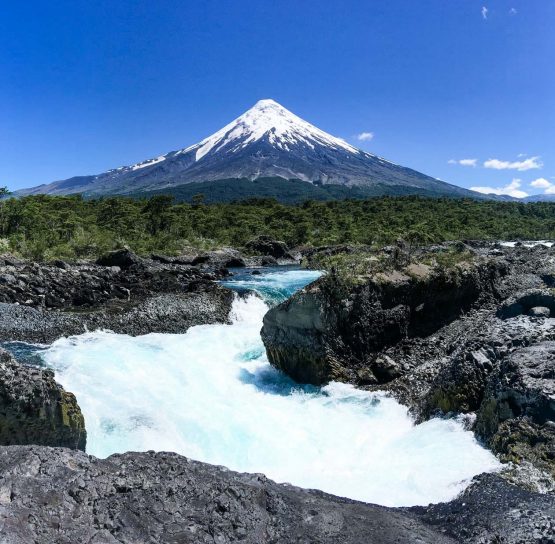 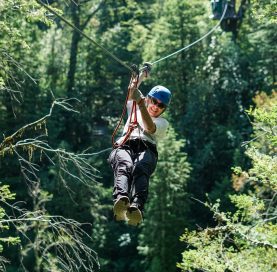 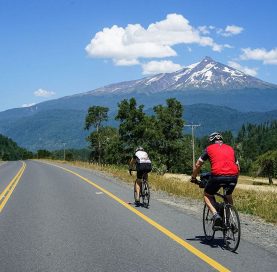 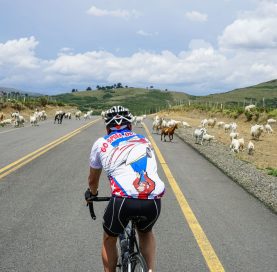 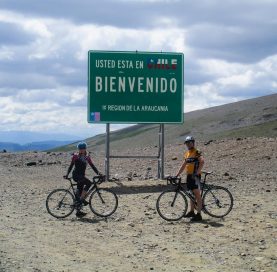 Amazing scenery, challenging riding, extremely helpful and friendly guides, lodging was very nice. A great way to see the country and get a feel for the rural areas which you would otherwise not see.

Excellent value compared to other high end trips which are more expensive for fewer days. The guides were really exceptional. Loved the group size at only 12 as we really got to know them as well as all of the guests.

Ride from the UNESCO Araucarias Biosphere Reserve to the Corralco Hotel and Spa.

After meeting in Temuco, we’ll shuttle 2 hours to the tiny, quaint town of Curacautín, conveniently nestled in the UNESCO Araucarias Biosphere Reserve of Malalcahuello. (Ever wonder where ‘monkey-puzzle trees’ live? You found it.)  Stop for lunch and a bike fitting. Take a 26-mile warm-up ride through forests of ancient araucaria trees, with Lonquimay volcano in your sights. Arrive at Corralco Hotel & Spa, a beautiful wintertime ski resort. Tonight, enjoy an orientation and briefing session before the official welcome dinner.

Kütralkura Geopark and The Andes Climb.

Shuttle 30 minutes to the Sierra Nevada Range. Pass through the 2.8-mile Tunnel Las Raíces, Chile’s longest. Set off bicycling smooth roads through a flat valley beside the Lonquimay River. This section features Chile’s first UNESCO Geopark, Kütralkura. Bike through the lands of different Pewenche communities as you begin to climb, ascending the international Pino Hachado Pass connecting Chile with Argentina. The second half of the climb offers some serious grades, finishing with a 14-mile climb to the peak altitude of 6,181 feet above sea level. At the summit – the border with Argentina – enjoy the truly breathtaking scenery of the Andes. Rest and refuel a bit, then hop back into the van to return to the Corralco Hotel & Spa. Tonight’s dinner will be at a local restaurant in Malalcahuello.

Hike into Kütralkura Geopark to Coloradito Hill for terrific views of 4 volcanoes.

Stroll through a forest of 2,000-year-old trees. Head to Pucon, the Lake & Volcano District’s adventure hub.

This morning, hike from the hotel to Cerro Coloradito, a small reddish hill that boasts amazing views of 4 volcanoes: Lonquimay, Llaima, Sierra Nevada and Villarrica. Besides the fantastic views, the hike offers very sparsely-traveled trails and a stroll through an ancient forest of araucaria trees – some more than 2,000 years old! Check out from the hotel to begin the 3-hour shuttle to Pucón, the Lake & Volcano District’s major adventure tourism destination. Stay tonight and tomorrow night at either Hotel Martina del Goñi, Casa Solaria or the Antumalal, depending on your tour date. Explore Pucon this evening: your guides will be happy to provide some local knowledge about great dining and shopping.

Villarrica National Park Loop Ride: beside the river and up the volcano - and down again.

Curarrehue, a small Mapuche village near the border with Argentina. The route rolls beside the river Trancura with views of three volcanoes: Villarrica, Quetrupillan and Lanin. The first 45 km of today’s ride is flat-to-rolling – just enough to get your legs going. Once you’re warmed up, climb a 30 km section on brand-new asphalt on the international road that leads into Argentina. Stay on this route all the way through Villarrica National Park until you arrive at the Customs station next to the mighty Lanin volcano, the tallest mountain in the Lake & Volcano District. Cruise a fun downhill all the way back to Currarehue. Enjoy tonight’s dinner hosted by a local Mapuche family.

Head into the heart of the Chilean Patagonia Rainforest.

Each day brings new beauty; today is no exception. Ride one of Chile’s most scenic roads, the Seven Lake Route. Pedal beside the shores of two beautiful lakes – Calafquén and Panguipulli – and cover three-quarters of the way around Villarrica, a majestic, snow-capped active volcano. Today’s ride is smooth and quiet; hardly anyone drives this route. Stop along the way to take in a panorama of five volcanoes. Pedal by the beach of Lake Panguipulli – meaning “land of lions. Continue riding beside the lake to Choshuenco village. Stop for lunch, then we’ll continue biking to Marina del Fuy, another beautiful lakeside lodge. Stay here for the next two nights.

Choose from a bevy of options today. Within the park, there are four hiking trails: the Magnetic Stones trail (3-hour hike, medium difficulty); the Truful Route (3½-hour hike, medium); the Truful River Route (6-hour hike, difficult); and Quinchamalí Lookout (3-hour hike, easy). Highlights include botanical forest, clear-water lagoons, mighty waterfalls and amazing views of snow-capped volcanoes. Would you like to learn about the reserve’s plants and wildlife? There are multiple nature walks that focus on botany, birdwatching and geology as well as flora & fauna interpretation. Feeling adventurous? Take the canopy zipline tour for an amazing experience of the rainforest (not included). A group of platforms between 15 and 25 meters high (50 to 80 feet) are linked to each other by hanging bridges and suspended steel wires. Glide across the cables as though you are flying over the rainforest, rivers and canyons. Visit the Huilo-Huilo waterfall and eat lunch at the local microbrewery.

Today begins with a shuttle out of Huilo Huilo Biological Reserve to the lakeside village of Futrono where we start cycling next to Lake Ranco – a gorgeous lake surrounded by mountains and green fields full of grazing cows. After a week in Chile’s Lake & Volcano District, you’ve probably realized that we are following a Scenic Road called “Red Interlagos.” But Bicycle Adventures is the first bike touring company to offer today’s brand-new section around this beautiful lake.

See the Osorno Volcano as you ride the German Settlers Route.

Shuttle 70 miles to the city of Osorno. Begin riding through this region known for its German heritage. Quaint villages, rolling hills and flat stretches lead to the beach of Lake Llanquihue. Continue riding to where a unique landscape is waiting: the Osorno Volcano with its perfect cone. Enjoy an incredible buffet lunch in a German family-owned restaurant, then shuttle 20 minutes to the five-star Hotel Cumbres Puerto Varas, where you’ll stay tonight and tomorrow night. Spend the evening exploring this beautiful city if you wish.

Ride to the base of Osorno Volcano and take the chairlift to the top for some terrific hiking.

This morning, start bicycling from the hotel beside Lake Llanquihue, into the landscape of the perfect cone Osorno Volcano. The side of the volcano reaches right to the shore of the lake. Pass through the middle of this astounding landscape as you ride to the village of Ensenada. This 29-mile route is one of the most beautiful rides of the tour. In Ensenada, regroup for a quick snack and then start the most challenging climb of the trip: the Osorno Volcano. This 7-mile challenge is one of the steepest climbs in South America, if not all of Europe. If you’re not up for the climb, we have another beautiful ride for you. After a glorious day, shuttle back to the charming German-style city of Puerto Varas to relax and enjoy a farewell dinner at a local seafood restaurant.

Enjoy a leisurely morning, then it's off to Puerto Montt’s airport.

It’s time to say goodbye to the beautiful Lake & Volcano District of Chile. There is one complimentary 10:00 a.m. shuttle to El Tepual airport in Puerto Montt. However, since most flights leave Santiago for North America in the late evening, many guests prefer to enjoy this last morning in Puerto Varas and taxi there later. (Taxi fare to the airport is approximately $20 USD).

If you choose to spend the morning in Puerto Varas, you can walk to town to explore the marketplace and shop for souvenirs, handcrafts and the woolen clothing for which the area is known. Go paddleboarding or just take it easy. Then it’s off to catch your flight back to Santiago and onward to wherever your travels take you next. It’s been a trip you’ll always remember!

$1,506
This is not required. It is an optional fee to allow a solo traveler to guarantee a private room for the duration of the tour.

Ready for Your Next Adventure?

Both tours are guaranteed!