All breakfasts. One lunch and one dinner on your own. 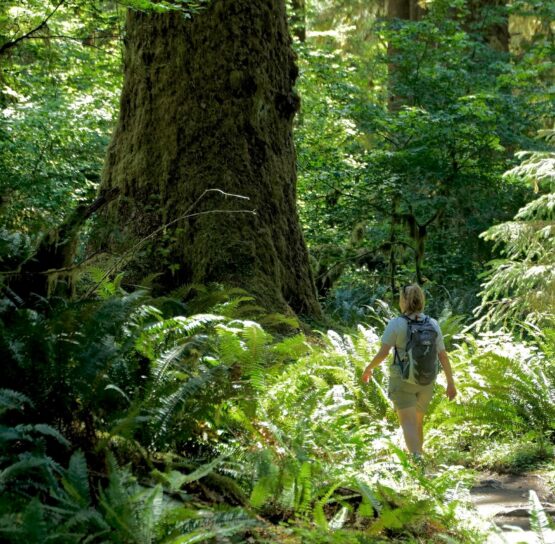 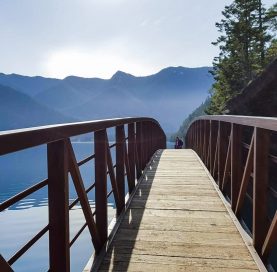 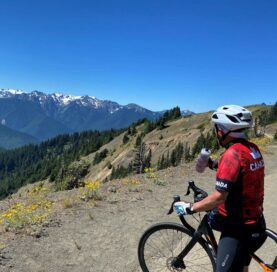 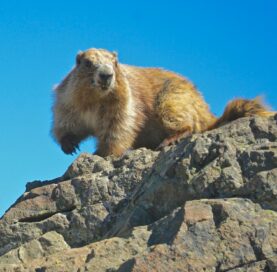 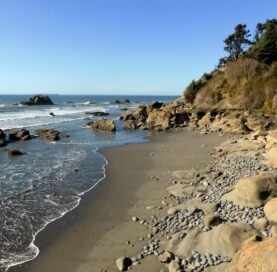 The weather was perfect and the scenery gorgeous. All shared with a fun group of people. Who could ask for more?!

Incredible tour with very knowledgeable people. We had lots of fun and learned much as well.

Our new itinerary circumnavigates the entire Olympic National Park, taking in more of the peninsula with less van shuttling and backtracking. We’ve made the cycling more leisurely – giving you more time to enjoy the sights along the Discovery Trail – and the hikes are even more spectacular than before!

Decades in the making, the Olympic Discovery Trail follows an old rail line on the Olympic Peninsula. No logging trucks! Our tour covers about 100 miles on this mostly paved trail with the snowcapped Olympic Mountain Range to one side and the Strait of Juan de Fuca on the other. Enjoy stellar views from waterfront inns every night but one. We begin at Lake Quinault and head north and east around the peninsula, stopping at Kalaloch, Ruby Beach, the Hoh Rainforest, Forks, Lake Crescent, and Port Angeles before we hit the high point of the tour (and the peninsula) at Hurricane Ridge. We also get off our bikes to take a closer look at things, hiking in ancient forests, on beaches, and through sub-alpine meadows. Stay at two National Park lodges on the water. Finish the week with a coastal bike ride and beautiful ferry ride straight into the heart of the Seattle waterfront!

BIKES for Olympic Discovery Trail: The trail surface is mostly paved with some short sections of hard-packed gravel. We recommend bikes (road or flat bar) with 32mm or greater diameter tires. NOTE: Our extra small (XS) road bikes will only accommodate 28mm tires on the front.

This tour is operated under special use permit/s with Olympic National Park. Bicycle Adventures is an equal opportunity provider.

Hike through ancient forests at Lake Quinault and explore the beach at Kalaloch.

To the Northwest Coast natives, Quinault means “river with a lake in the middle.” It is the name of the land, the lake, and the tribe who lives here. The Quinault River basin famously holds six different species of record-sized trees. It’s a bit of a drive (~2.5hrs) from Seattle, but don’t worry, you will be craning your neck to catch a glimpse of the tops of the “Big Trees” before you get out of the van! Explore the network of trails along the lake this afternoon to see some of the largest western red cedar, Sitka spruce, western hemlock, and Douglas fir trees on the planet. Sample a dozen or more varieties of native berries depending on the season. From Quinault we drive another half-hour to Kalaloch on the Pacific Coast.

Kalaloch means “a good place to land” and we think you will agree. In sharp contrast to the soaring inland forests, forbidding-looking tangles of gnarled spruce and wind-whipped shore pines line the coastal beaches. Take a walk on the beach, keeping an eye out for scurrying shore birds, surf-riding scoters, playful otters and soaring bald eagles. In the evening, the garnet-tinged sands and offshore haystacks of Ruby Beach form a photo-perfect sunset backdrop. Spend the night overlooking the beach at Kalaloch National Park Lodge.

Hike in the most famous rainforest in the park! Cited as being one of the quietest places on earth, Hoh means “whitewater,” an apt description for this boulder-strewn, braided ribbon of a river flowing from Blue Glacier on Mt Olympus – the lowest glacier in the lower-48 states. Begin at the Visitor’s Center on the Hall of Mosses Nature Trail and continue up the Hoh River Trail to Mount Tom Creek for lunch by the river. With any luck, we will track down an elk herd along the way, but regardless: colonnades of spruce stretch toward the sky, big leaf maples spread out over fern meadows, and lichens and mosses run wall to wall and floor to ceiling. There is more biomass here per acre than anywhere else on the planet! In this valley, you will inevitably run out of different ways to describe “green”. Spend the night in Forks, WA – once the logging capitol of the Olympic Peninsula, now famous as the setting for the “Twilight” teen vampire series. With a population of less than 4000 souls (werewolves and vampires are not counted), it’s still the “big city” on the peninsula’s remote westside. Stay at Pacific Inn Motel.

Saddle up the bikes and set out on the Olympic Discovery Trail. Ride the Spruce Railroad Grade following the shores of Lake Crescent.

Today, after a short van shuttle (or optional 12-mile morning bike ride along Highway 101), we begin cycling east on the Olympic Discovery Trail. Beyond the dense forests, glacial-carved Lake Crescent makes a magnificent backdrop for much of the ride today. The clear, cold waters (you can see up to 60 feet down), and stunning depth (over 600 feet!) give the lake it’s blue-green color. Two species of trout found nowhere else in the world also call it home. We spend tonight on the shores of this gem at historic Lake Crescent National Park Lodge. At sunset, the lakeside setting is perfect for a stroll or a glass of wine. Once you’ve settled in at the lodge, don’t miss taking the relatively easy (~2.5 mi.) hike to cascading Marymere Falls. It’s hard to say which is more spectacular – the waterfall or the old growth forest. You decide. This walk is so lovely you may want to make time to do it again before breakfast in the morning!

Continue on the Discovery Trail from Lake Crescent along the Strait of Juan de Fuca to Port Angeles.

Rejoin the Olympic Discovery Trail where we left off yesterday and continue riding east toward Port Angeles along the Strait of Juan de Fuca. Begin with a descent from Lake Crescent to sea level and savor dramatic coastal vistas at Salt Creek. Cross the recently unfettered Elwha River – the site of the largest on-going dam removal project in the world. Pedal into Port Angeles (pop. 20,000), the biggest city and the busiest port on the peninsula. Ride out Ediz Hook for a beautiful view of town with the snow-capped mountains as a backdrop before you make your way to the waterfront Red Lion Hotel, our lodging for the next two nights. Dinner is on your own tonight.

Spend the day in subalpine glory at Hurricane Ridge. Enjoy views of the Olympics and the Strait of Juan de Fuca. Hike, ride, or both!

Today we ascend to Hurricane Ridge, the literal high-point of the tour. As its name suggests, wind truly shapes this land, gusting to over 70 mph, with snows 30-35 feet deep in the winter. Go for a hike through alpine meadows and tree islands, dodging black-tailed deer and Olympic marmots – an endemic and adorable species of giant ground squirrel. Revel in a panorama of sweeping views of the Olympic Mountains, the Strait of Juan de Fuca, and Vancouver Island. Enjoy lunch with a view near the Visitor’s Center.

If you prefer, you can challenge your legs by riding your bike to the Ridge instead of taking the van. The overall 5% grade of this climb, ascending one vertical-mile in 20 miles, is relatively steady, making it somewhat easier than the statistics might suggest. If you choose to ride, there will still be time to enjoy a hike before we return to Port Angeles for a celebratory dinner at our favorite local restaurant.

[Special Note: The National Park Service does not allow commercial tours to ride down from Hurricane Ridge.]

Ride the Olympic Discovery Trail from Port Angeles to Sequim Bay. Cross Puget Sound on an afternoon ferry back to Seattle.

Ride the Discovery Trail right out the front door of our hotel this morning. Continue east through forests dotted with farmlands to the small town of Sequim (pronounced “skwim”), the rain-shadow retirement capital of the peninsula and home to Western Washington’s only native cactus – the brittle prickly pear. While not quite a “desert,” less than 30 inches of rain fall here per year, compared to nearly 200 inches just 40 miles away at the Hoh! The area is renowned for its lavender festivals as well as the world’s first interactive elk-crossing. The female herd-leaders have been fitted with collars which set-off warning signals on the highway when they are in the area. Continue to Blyn for lunch before we load up bikes. Shuttle to Bainbridge Island where we catch a ferry into downtown Seattle – the perfect end to a perfect week!

$1003
This is not required. It is an optional fee to allow a solo traveler to guarantee a private room for the duration of the tour.